WIKA Korea is a subsidiary of the world’s leading manufacturer of pressure, temperature, level, flow and related calibration instruments, force measurement / mobile working machine etc. WIKA subsidiary in Korea was formed in 1997 and had been in Seoul till 2014. But since 2014, the head office moved to Osan. There are also sales offices in Busan and Seoul. WIKA Korea operates production facility where RTD’s, thermocouples and thermowells, diaphragm seals, pressure gauges have been manufactured.

WIKA Korea has been growing with revenues CAGR of 18% since foundation. And In 2017, it celebrated its 20th anniversary of foundation. All employees give their best to provide optimized solution and products with our customers on the basis of state-of-the-art production facilities in Osan.

Korean market could be very attractive due to its industrial structure for WIKA Group that is a worldwide leader in pressure and temperature measurement.

Basically manufacturing industries had been leading economic growth and various industries as IT, services, Pharmaceutical & Biotechnology and Food & beverage are also important parts of industrial structure in Korea. It means that Korea has balanced structure of industries. And WIKA Group has comprehensive product portfolio that can meet requirements of each application and industry. Therefore they were likely to have interests in entering the Korean market.

Recently, WIKA Group has been trying to apply E-business models like webshop, CRM. Korea online market is one of the largest e-commerce market in the world. WIKA Korea has been adopted first than other subsidiaries on this account.

4.   What support do you want from the Korean government?  Also, what is the obstacle of investment activities and business activities?

Although most foreign investment companies in Korea have 100% native employees and contribute to the society paying taxes faithfully without any tax deductions, there are many invisible barriers for them. Particularly foreign investment companies are facing many difficulties with projects Korean government and public institutions handle. Korean government and public institutions concentrate on “localization” for their achievements. For example, they sometimes use technologies and parts foreign investment companies have made in first stage of development sneakily. Then they give some documents or drawings they got to local companies illegally and let them copy in stage of mass production. It is clearly absurd discrimination by the government. Such practice should be abolished as soon as possible. 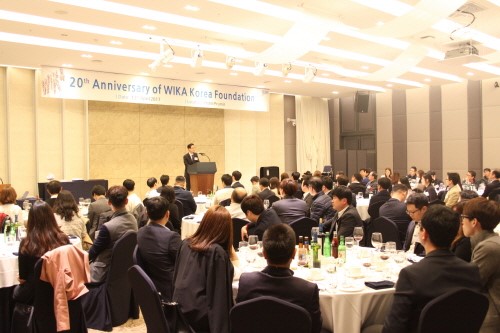 5.   What is the reason for a multinational’s success in Korea?

There are many reasons of multinational’s success in Korea. But above all, I think that large database they have is a key factor to get well-settled in Korea. For example, WIKA Group accumulates massive data from worldwide networks and then shares it within their subsidiaries actively.

We are aiming to become a market leader in the mid & low-end market as well as in the premium market through business expansion and aggressive M&A. Based on this, WIKA Korea is targeting to be the TOP5 of WIKA Group in the next five years. Currently we are TOP10 of WIKA Group.

And WIKA Group has 'Vision 2025' to become a leading and innovative company in the global measurement industry. WIKA Korea improves its profit structure by expanding MRO capability and service businesses to realize that.